It seems that everybody around at the beginning of stand up wants to claim that they were the one that started the whole thing. Who cares, no one is giving away awards for the one that is responsible for it all. There’s no cash bonuses being handed out, even if we all did agree one person is the most responsible, then what. Is there a parade, or a big sponsorship waiting? I don’t think so. Does that person get a hall pass at any surf break he wants? If so I want to be that person, but unfortunately I’m pretty sure there’s no hall passes being handed out.

Is it a matter of recognition? Maybe, but let’s examine that for a moment. The most I can ever see is an honorable mention at a future stand up hall of fame. We know there will never be an honorable mention at the surfing hall of fame, they can’t stand us. Who would that be anyway? Do you take it all the way back to John Zapotaky. While I’m sure he enjoyed it, it didn’t exactly take off from his involvement. How about back to the Duke, he’s the one that showed Zapotaky. Or do you go all the way back to the ancient Hawaiians? There’s just no question they did stand up paddle surfing. Even though there is no photographic evidence that they were doing stand up paddle surfing, they were all paddlers. Is there even the slightest chance they failed to put paddle and surfboard together?  Surely it would have been done by at least a few of them, and probably the folks that stuck with prone paddling complained that they were hogging all the waves.At least they probably didn’t get grief about having dangerously big boards.  ALL the boards were dangerously big.

Then there’s these guys: 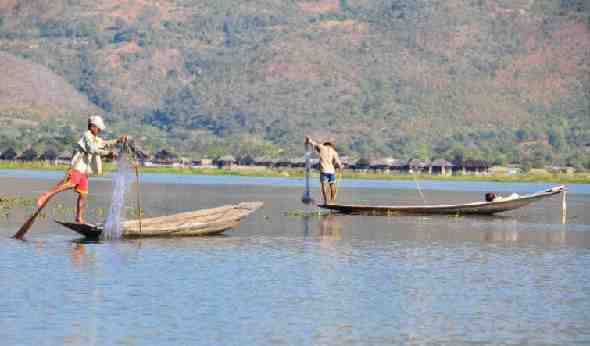 The Peruvians also have a legitimate claim in their Tortoras and I’m sure they’re not the only indigenous people to discover this mode of transportation. So I guess it depends how far you want to go back to give credit. Again even if we designate one person or group prior to Laird’s involvement, the sport didn’t exactly take off.

No matter what your perspective of Laird is, to me there is no question he was the tipping point factor that got the sport to the masses. Did he do it alone, absolutely not, would it be where it is now with out him, absolutely not. You have to admit that Laird has transcended surfing and has become a bona fide celebrity. Whatever he does draws attention, whether it’s stand up or just standing on the beach. He draws a crowd and I’ve seen it first hand over and over again. And even though I was there on the first day he and I did it together, the likes of Jennifer Aniston and  Pierce Brosnin aren’t going to try it because Dave Kalama does it.

The real beauty of all that is the guy most deserving of the recognition could care less about it, He’s much too busy doing it.

Is the first domino the most important or is the domino that spreads the single file line into a sprawling fan of dominos the most important. Like I said, who cares. The important thing is that the dominos are falling and spreading at an incredible rate. So try as you might to get the magnifying glass at one point, you’d be missing all the beauty of the bigger picture. I guess the people that like to argue can argue over this for quite some time because from what I can see, there is no one to give ultimate responsibility to. To some degree it really is and has been a team effort to get this message of stand up out to the world. Not so one person can wave his flag and say it started with me. Instead we can all fly the flag of this great sport and share it’s benefits to help make the world a little better, even if it’s for an hour or two, or as long as you are on the water.

Sure, I would like to say I’m the guy as much as the next guy, but even if I were, so what, I wouldn’t get a prize, I don’t get to drive in the carpool lane by myself, guys aren’t going to give me more waves because of it, fellow competitors aren’t going to let me win the race because of it, my mortgage company isn’t going to say ” Hey your all good, don’t worry about the loan, we’ll cover it for you”. It ultimately serves no real purpose. I’m just glad I’m one of the lucky ones that get’s to do this sport as my job. So while I might not be “the” guy, I am the guy that’s on the water as much as anybody, which is good enough for me.

ByAuthor Dave
You’ve probably seen most of our dvds or the pictures in the mags, maybe even read some of the stories from surf journalist about...
News

ByAuthor Dave
At the end of November 2009, I was greatly anticipating the coming winter and the waves I would ride. One morning as I was...