Nose riding looks easy, all you really do is stand there, but for many it seems like a mystery that’s unsolvable. With a couple of simple tips you can not only have a clue but most likely find yourself logging some serious tip time.

You can noseride on almost any SUP board, but there are certainly some shapes and designs that are easier than others. In general, a round nose offers more support than a pointed one, and moderate nose rocker keeps the tail from being levered up. A little concave in the nose helps as well. Some folks like a little V in the tail to make steering the board from the nose a bit easier–but I’m not a fan of V, to me it makes the rail to rail transitions too much like flipping a switch. It also helps to have a long fin to keep the tail under control if it’s levered out the back of the wave.

First and probably the most important is positioning. Positioning on the board is important but positioning on the wave is most critical. If there were a secret it is positioning yourself high up on the face. This serves two functions. One, because of the steep angle at the top of the wave, it is easier to keep the nose from pearling, and two, the crest of the wave essentially peels over the board  and holds the tail down so that it counters your weight at the nose.

Next, positioning on the board is a delicate dance of balance and control. The idea of course is to get yourself as close to the nose as possible, hopefully to the point of hanging your toes over the nose. The problem is the closer you get to the nose, the less control you have over the board and the more the board wants to pearl. The control issue is managed by delicate steps on your way to the nose, being careful to keep your weight centered over the stringer, or middle line of the board, this will keep the board traveling on the same line and hopefully maintain that high line that makes it much easier.

You can shuffle around to move on the board, but it upsets the board quite a bit and makes it hard to keep the board trimmed. Still, you might find shuffling around to be easier at first, and there’s no harm in it, but sooner or later you’re going to want to cross step. Cross-stepping is the classic way to make your way to the nose. Not only does it look cool, it also enables you to maintain control of the board. As you cross you can control the pressure on your toes and heel to keep the board flat. If you aren’t already cross-stepping around on your board then now is a good time to learn. You can cross step anywhere for practice, even though it might look weird to your spouse or friends. Knees bent, weight balanced evenly between toes and heels, pick up the rear foot, step over the toes of the front foot and place it a few inches or so in front of the prior front foot. Transfer your weight to the new front foot, keeping toe and heel pressure balanced, move the new rear foot around the heel of the front foot and place it a few inches ahead. As the shampoo bottle says–”lather, rinse, repeat”. Going backwards is the reverse of frontwards of course. The biggest problem you’ll have is keeping the pressure on toes and heel under control. Don’t try to go fast until you have full control of your weight and balance.

On a shorter board it might take two steps, on a 12 footer, maybe four steps, but in either case it will be an even number so your dominant foot is forward. As you cross step make the last step a bit longer to reach the magic spot on the nose. Once you get to the nose keep most of your weight on your back foot. This will help keep the board from pearling. The coveted hang ten takes much more practice and comes after you’ve mastered the hang five. 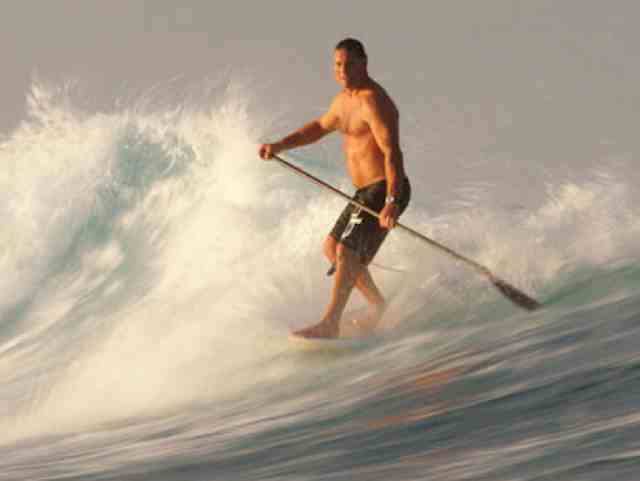 The paddle can also be used as an aid in balancing once you commit to the nose, by skimming it across the surface as you ride. If you feel the nose on the verge of pearling you can either step back to keep it from going under or just put more weight on your back foot if a little adjustment will suffice. You will also discover that you actually can have some control over the board from the very tip. By pressuring your toes or heels the board will veer slowly to one direction or the other. Again, experimentation is key to learning this skill and many falls will come between you and success, but ultimately you will make it.  Another tip that will make it a little easier is to try and ride on your front side whenever practicing. This will allow you to integrate your toes more into the equation, which are more sensitive to fine balance adjustments. You will want to master it in both directions though ultimately. Good luck.