Hopefully you’ve been practicing that long catch. It’s a critical component of any stroke. Now we’re going to talk about adding power to the Tahitian stroke.

The toughest part to learn is how short the power stroke is. We’re all used to stroking hard at least to our feet. Some people try to pull even further than that. To learn the stroke I want you to overcompensate, and apply the power in just a super brief pull. As soon as you apply power you should stop pulling. At this stage people can’t seem to do it briefly enough. Focus on it. I know it will feel like you’re just patting the water. Concentrate on giving a hard pull and then ending your pull and starting to get the paddle out of the water.

You’ll be surprised how well this quick pull will move your board, even though it feels like you are not doing any work.  The catch and first bit of pull is 70 percent of the power in any stroke. Applying energy after the catch adds power, but only a little bit, and it takes a lot of energy since your body isn’t in an efficient position. You also get both your hands and your torso out of position for the next stroke, and you have to get them back where they belong before you can start again. All that movement takes energy. The Hawaiian technique is fast but you need a lot of endurance to compensate for inefficiency.

The Tahitian stroke is constantly lifting the nose of  the canoe or, in this case, a stand up board, and it’s designed to build momentum. Your hands, torso and shoulders return to position automatically, on a circular, continuous path, and only travel a short distance. To build speed you increase the cadence, and it’s a lot easier to do that because the stroke recovery is shorter and starts earlier. 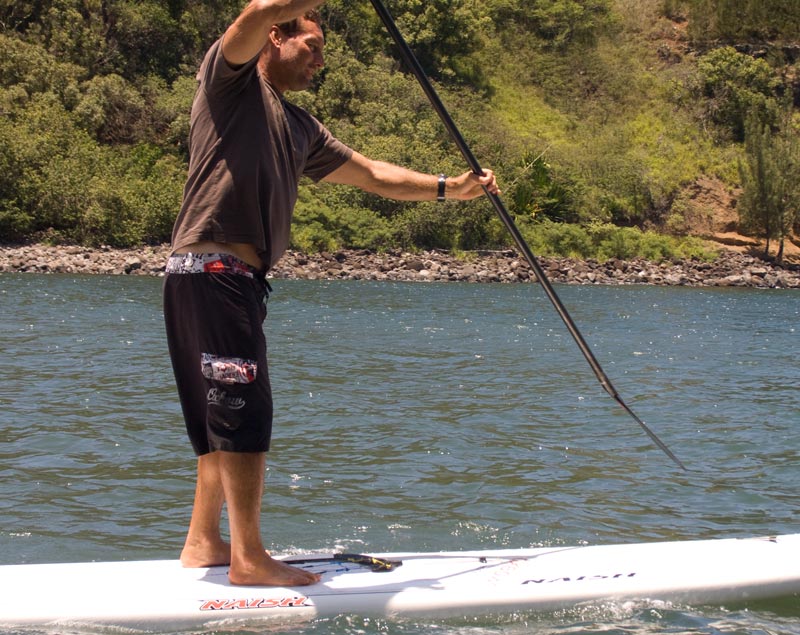 You need to get a lot of power in that first bit of pull, and to do that you need your shoulders and torso engaged. If you are doing the catch right, then your shoulders and torso are already in the right position for a stroke. So as soon as the paddle is in the water you twist your torso and shoulders back straight. Again, to get the feel for this I want you to overcompensate and do this as a sudden jerk. You can mellow out later and get things smooth, but we want all that energy firing on the first foot of pull, and then it ends.

We’ll break down the recovery and put the entire stroke together next time, but for now let’s add the basics of the Tahitian recovery stroke so you can get the paddle back out in a good catch and get the power down.

In the Tahitian stroke we don’t wing out the upper arm at all because you’d have to work to get the upper arm back up above the paddle and re-stack your shoulders. Instead you pull the blade up and out of the water like drawing a sword. Your lower arm does the work of pulling the sword. You break the wrist of your lower hand inward and push the paddle upwards. The upper hand holds the handle like a knob and twists the blade to a feathered position without putting a strain on the wrist. 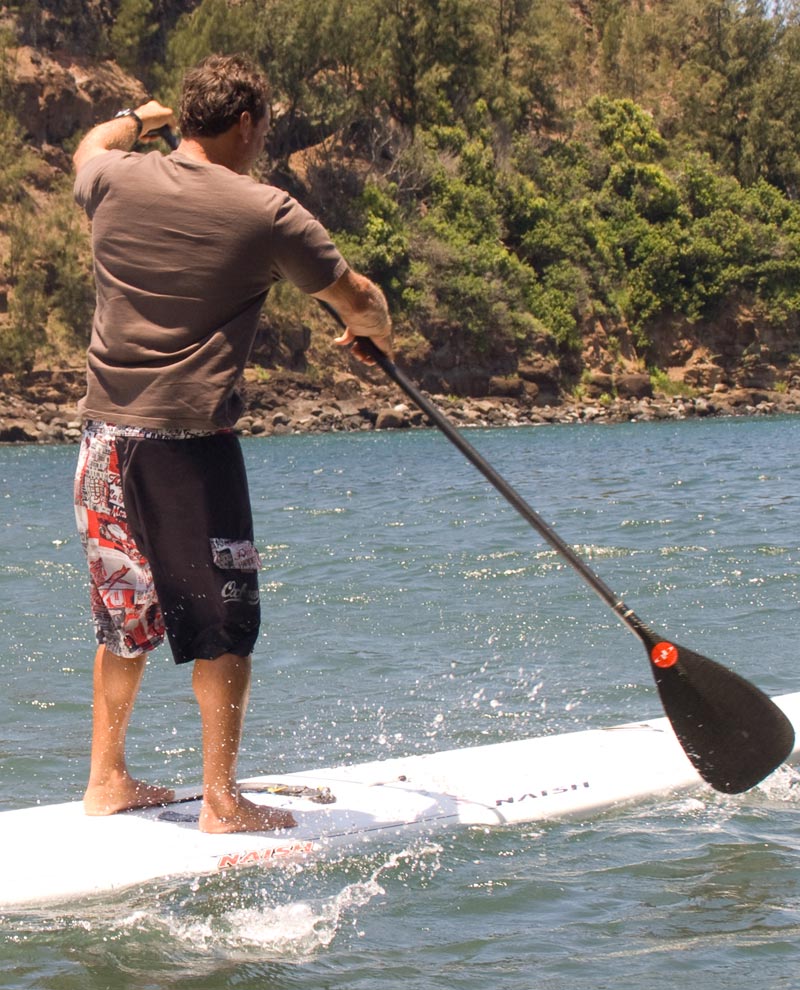 Pulling the paddle out–well before the feet. Note the lower wrist is broken and I’m pushing the paddle up with my lower arm. My muscles are relaxed, getting a chance to regain power. My upper arm is a little too far winged down–hey, I don’t do every stroke perfect.

As the blade leaves the water we start our catch part of the stroke.  Move your upper shoulder, arm and upper torso forward in a  gentle punch.  Stretch the muscles forward and reach, reach, reach for the catch. The upper arm which has been extended up over your head by the sword pull, now moves a few inches inward towards the head and the torso rotates to stack the shoulders. At the catch the muscles start to spring back almost by themselves, and a firm torso and shoulder rotation applies power. The upper hand pushes forward and slightly down to aid in the power and position the shaft vertically. Almost as soon as power is applied you relax, and start pulling the sword again. Instead of winging up and down or swinging the paddle around your upper arm moves in a small circle with your hand moving in an almond shaped circle.

You’re almost there, or at least you almost know all the chords. Next time we’ll break down the recovery stroke some more, and we’ll pay attention to which muscles can be relaxed at different parts of the stroke, and then we’ll put it all together and tell you what parts to pay attention to when you’re practicing.

Really want to get better ?